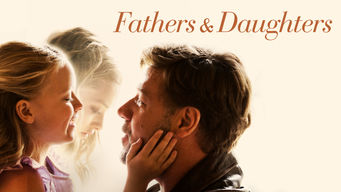 How to watch Fathers & Daughters on Netflix Austria!

We'll keep checking Netflix Austria for Fathers & Daughters, and this page will be updated with any changes.

After his wife dies, a Pulitzer Prize-winning author has a breakdown while raising his daughter. Years later, she can't shake her painful childhood. Childhood trauma can't be erased, but for a young woman struggling with life, a new view of the past can change it all.