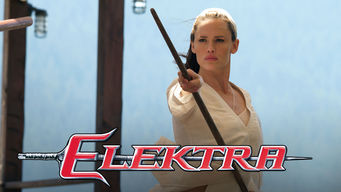 How to watch Elektra on Netflix Belgium!

We'll keep checking Netflix Belgium for Elektra, and this page will be updated with any changes.

Jennifer Garner reprises a role she originated in Daredevil. Now an assassin for the shadowy Order of the Hand, Elektra is assigned to off a widower. A female assassin with axes to grind. She's got OCD, toxic rage and, bad luck, she's in love with her next assignment.