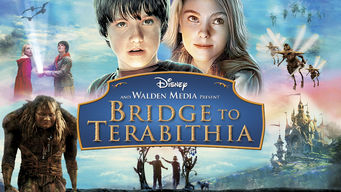 How to watch Bridge to Terabithia on Netflix Brazil!

Unfortunately you can't watch "Bridge to Terabithia" in Brazil right now without changing your Netflix country.

We'll keep checking Netflix Brazil for Bridge to Terabithia, and this page will be updated with any changes.

New classmate Leslie unlocks a mesmerizing world of fantasy and imagination for fifth-grader Jesse in this adventure based on the best-selling novel. Two teenage outsiders rule a magical kingdom of their own creation, but real life keeps getting in the way.

The Angry Birds Movie
The BFG
49