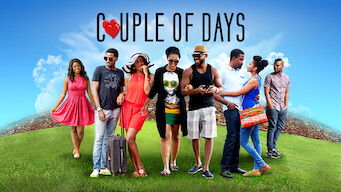 How to watch Couple of Days on Netflix Brazil!

"Couple of Days" arrived on Netflix Brazil on February 26 2020, and is still available for streaming for Brazilian Netflix users.

We'll keep checking Netflix Brazil for Couple of Days, and this page will be updated with any changes.

Three couples, each in different phases of romance, head to Ibadan for a fun and frisky holiday. But secrets soon spill, causing trouble in paradise.