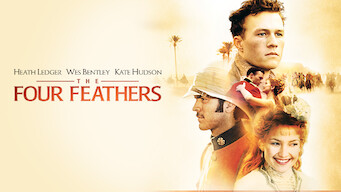 How to watch The Four Feathers on Netflix Ireland!

Unfortunately you can't watch "The Four Feathers" in Ireland right now without changing your Netflix country.

We'll keep checking Netflix Ireland for The Four Feathers, and this page will be updated with any changes.

A British officer resigns before a battle against Mahdi rebels and must redeem himself to his fiancée and friends, who have branded him a coward.