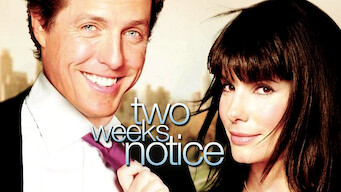 How to watch Two Weeks Notice on Netflix Japan!

We'll keep checking Netflix Japan for Two Weeks Notice, and this page will be updated with any changes.

A do-gooder lawyer working for a charming but selfish real estate mogul finally gets fed up and gives notice, only for their real feelings to emerge. This tycoon won't make a move without his right-hand woman. But after a year of calling the shots, she's calling it quits. Miss Congeniality
Four Weddings and a Funeral
The Rewrite
Did You Hear About the Morgans?
Music and Lyrics
Sabrina
Bridget Jones: The Edge of Reason
One Fine Day
100