Is Unbreakable on Netflix Spain?

Find out where Unbreakable can be watched on Netflix Worldwide 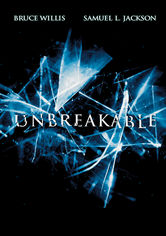 An ordinary man makes an extraordinary discovery when a train crash leaves his fellow passengers dead but him unscathed. Is he truly unbreakable? The answer could lie with a mysterious man who has a disease that renders his bones as fragile as glass.

Unbreakable Is Available For Online Streaming In The Following Countries