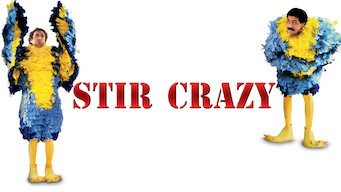 How to watch Stir Crazy on Netflix Bangladesh!

"Stir Crazy" arrived on Netflix Bangladesh on January 31 2021, and is still available for streaming for Bangladeshi Netflix users.

We'll keep checking Netflix Bangladesh for Stir Crazy, and this page will be updated with any changes.

Two down-on-their luck friends are mistaken for the same burglars who robbed a bank and get sentenced to 125 years in a maximum-security prison. Wrongfully convicted. Locked up for life. These two clowns have one last shot at freedom: the jailhouse rodeo. Giddyup.