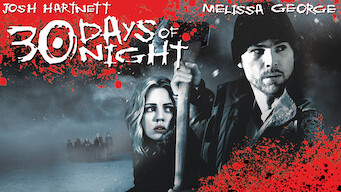 How to watch 30 Days of Night on Netflix Switzerland!

Unfortunately you can't watch "30 Days of Night" in Switzerland right now without changing your Netflix country.

We'll keep checking Netflix Switzerland for 30 Days of Night, and this page will be updated with any changes.

When a monthlong period of darkness sets in on the tiny Alaskan town of Barrow, the residents are visited by a flock of bloodthirsty vampires. Robin Hood: Prince of Thieves
Gandhi
The Hurricane Heist
Blue Valentine
InuYasha
Before Sunset
Around the World in 80 Days
P.S. I Love You