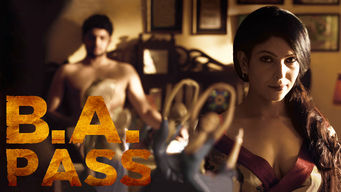 How to watch B.A. Pass on Netflix USA!

"B.A. Pass" arrived on Netflix USA on June 4 2018, and is still available for streaming for American Netflix users.

We'll keep checking Netflix USA for B.A. Pass, and this page will be updated with any changes.

Orphaned and at loose ends, young Mukesh falls into the seductive orbit of married Sarika, who leads him ever deeper into a world of sex and betrayal. He's an orphan adrift in the world, she's a married femme fatale. For this pair, seduction becomes a dark obsession.